Is FBI indeed any closer to drawing a conclusion on motive for Las Vegas shooting?! I very much doubt it. – M.N. 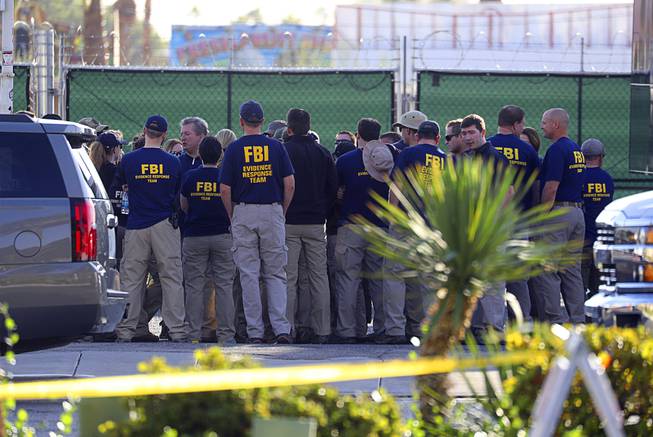 FBI agents gather near an entrance to the site of the Route 91 Harvest festival in Las Vegas, Oct. 4, 2017. A lone gunman, Stephen Paddock, fired down onto attendees at the festival from a 32nd-floor Mandalay Bay suite nearby, killing at least 59 and injuring hundreds.

Aaron Rouse, FBI Special Agent in Charge of the Las Vegas Division, responds to a question during a media briefing at Metro Police headquarters Wednesday, Oct. 4, 2017.

A month into the investigation of why Stephen Paddock indiscriminately rained gunfire on thousands of concert attendees, killing 58 and injuring hundreds at the Route 91 Harvest festival, investigators maintain that there is “absolutely” no indication the gunman was ideologically driven or affiliated with any international or domestic terror or hate group.

But investigators have made significant strides in their efforts to try to determine the how and the why the 64-year-old Mesquite gunman decided to shatter windows of a 32nd story Mandalay Bay suite, bringing forth the biggest loss of life during a shooting in modern U.S. history Oct. 1 on the Las Vegas Strip, said Aaron Rouse, FBI Las Vegas’ special agent in charge.

“We do know a lot more (about Paddock) than when we started,” Rouse told the Las Vegas Sun Wednesday afternoon. “I feel like we are going in the correct direction to understand why this happened.”

Asked if investigators have pinpointed a possible motive, Rouse said he believes that, “When we’re done, we’ll have as close to an answer on the why as you’re going to be able to come to without talking with (Paddock).”

But before that conclusion is made and publicly announced, investigators need to ensure that determination comes from evidence and facts and not from speculation or assumption, Rouse said, asking for patience from the public. “It won’t be as fast as people would want it to be. This isn’t a TV show.”

Since the shooting, investigators have received and tracked hundreds of tips, Rouse said.

Initially, the probe extended worldwide, but it’s scaled down since agents got a lot of the answers they were searching for, which include Paddock’s movements and contacts, Rouse said. Briefings are held daily and new developments are communicated to Metro Police, which is working in conjunction with its federal counterpart.

At one point more than 300 FBI personnel had been summoned, with hundreds more in rotation when the original group became fatigued. The FBI’s Evidence Response Team “painstakingly” worked side by side with Metro’s forensic investigators in a “very long and detailed effort” to measure and study the killing field.

“When they’re done with their final report, there will be — I think — as best representation forensically of what happened as you can possibly ask for,” Rouse said. And that information led investigators in “good directions.”

The agency’s victim assistance unit repatriated belongings left behind by the victims with their loved ones. “You never quite know how a small object is going to affect someone’s life,” Rouse said.

Interviews and follow-ups have been conducted and subpoenas have been served and returned. It’s not rare to see hundreds or even thousands of these court orders in an investigation of this scale, Rouse said. Footage related to the shooting, a substantial amount turned in by civilians, has amounted to more than 40 terabytes.

Rouse said video provided by the public has helped tighten a timeline, which has seen several adjustments. “We can’t say ‘thank you’ enough.”

We’ve been very fortunate that we’ve had a fairly good, robust understanding of the events that have gone on, and unfortunately people got wrapped up around a timeline,” Rouse said, referring to what Metro Police has said about that due to its preliminary nature, it was likely to include inconsistencies as investigators learned more, and dealt with different time stamps, logs and witness statements.

Responding to criticism of the shifting timeline, Clark County Sheriff Joe Lombardo said during the last public briefing Oct. 13 that information released the days after the shooting, which was what investigators knew at the time, was to “calm the public” and not serve as an official account or build a legal case.

As with other modern mass-casualty events, conspiracy theories have been rampant online. Was there a second shooter; was it a false-flag operation, is there a government cover-up?

All evidence points to Paddock being the only shooter and “we’re too busy to pay attention” to online conspiracy theorists, Rouse said.

“Thousands of people have been involved in this effort, (a cover-up) would require an effort to keep all of them in line with the same story and that doesn’t happen in real life,” Rouse said. “So we’re going to continue to focus on the facts, we’re going to continue to focus on being thorough, and it will take as long as it takes, but I believe we’re making significant progress.”

Asked if the misinformation has led to false tips, Rouse said that it happens in every investigation.

“I think it becomes more intensified because of the media outpouring on this particular event,” Rouse said. But they follow every lead to assure that what’s being reported “absolutely did or did not happen.”

Victims, their loved ones and the public deserve for the FBI to be right, as that contributes to the trust and confidence the federal agency seeks. “I have the ultimate confidence to know that we’re following a tried and true course that has worked well for law enforcement agencies worldwide.”

Nevada can be proud of the public-private partnerships, Rouse said.

“Bad things are going to happen,” Rouse said. “It’s how you respond to them that shows your true sense of community, and this is a strong community.”